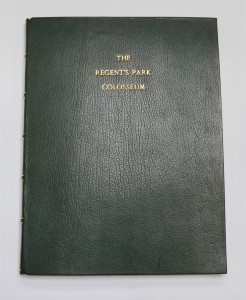 The Regent's Park Colosseum Or, "without hyperbole, the wonder of the world" Being An Account Of A Forgotten Pleasure Dome And Its Creators. ... Embellished With Six Hand-Coloured Plates and Numerous Graphic Illustrations.

Folio (362 x 274 mm.) Bound in the publisher's full dark green gilt-lettered morocco, decorative gilt turn-ins, marbled endpapers, a.e.g., preserved in the publisher's dark green cloth, dark green faux suede-lined solander case, the upper board and spine lettered in gilt; pp. 73, [3], including colophon, illustrated with 6 colour plates including frontis, each printed in monochrome collotype and hand-coloured, of which five are guarded with a captioned tissue, 26 b/w plates, and 3 b/w figures within the text; a fine copy. Limited edition of 200 numbered copies signed by the author. This copy signed and numbered in blue ink, 97.

A handsome publication detailing the construction of the Regent's Park Colosseum, designed by Decimus Burton and constructed between 1824 and 1827. The rotunda initially housed Thomas Hornor's and E.T. Parris's enormous 360¬∞ panorama of London whose genesis was a series of over two hundred and fifty drawings of the city and its environs sketched by Hornor from a wooden hut atop the steeple of St. Paul's Cathedral in the autumn of 1821. Hornor's original intention had been to have the drawings worked up into four large engraved views with key sheets which would together form a panoramic view of London; a lack of subscribers resulted in Hornor only getting as far as publishing a prospectus and one of the engravings. Consequently, he decided to turn the drawings into one giant panorama and with the financial support of the maverick banker Rowland Stephenson, a canvas was erected around the interior walls of the purpose-built rotunda.

Initially a number of artists were engaged but this proved unsatisfactory for a work on this scale and subsequently, gangs of house painters were employed. By 1829 the panorama was on display and attracting large crowds, including royalty and the aristocracy; its popularity was not to last though and for a number of years the Colosseum changed hands as each subsequent owner sought to inject new life into the site before being demolished in the later 1870s. Ralph Hyde's compelling and scholarly text gives the full story of this metropolitan wonder, the whole enhanced by the hand-coloured collotype plates and other illustrations.