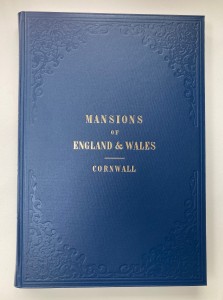 The Mansions Of England And Wales. The County of Cornwall.

Limited edition of 175 numbered copies, each copy signed by the publisher and the printer. Reproduced and printed by Adrian Lack at The Senecio Press, Banbury. The text printed on 105 gsm Lambeth cartridge and the plates on 200 gsm Olin natural. Bound by Ludlow Bookbinders, Ludlow. Inserted loose in the slipcase, a booklet containing an introductory essay by the facsimile’s publisher, Kenneth Cooper.

Published in 1846 for a small number of subscribers, Edward Twycross’s The Mansions of England And Wales. The County Of Cornwall was the first of what was intended to be a number of volumes covering every county. In the event only five further volumes appeared, these being devoted to the Counties Palatine of Lancaster and Chester, published in 1847 and 1850 respectively. Illustrated and described in the Cornwall volume are Anthony House, Pencarrow, Port Eliot, Tregenna Castle and Tregothnan, alongside a number of less well-known houses. A number of houses, including Cothele and Lanhydrock, have descriptions only.