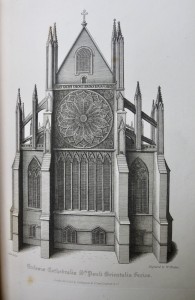 The History Of Saint Paul's Cathedral In London, From Its Foundation: Extracted Out Of Original Charters, Records, Leger-Books, And Other Manuscripts, By Sir William Dugdale, KNt. ... With A Continuation And Additions, Including The Republication Of Sir William Dugdale’s Life from his own Manuscript; By Henry Elllis, F.R.S. Sec. S.A. Keeper of the The Manscripts In The British Museum.

Folio (369 x 236 mm). Bound by F. Wright in contemporary purple elaborately gilt-panelled crushed morocco, the spine divided into six compartments with raised bands, gilt-lettered title to the second, the remaining compartments decorated with gilt floral tools and curlicues, elaborate gilt dentelles, marbled endpapers, a.e.g.; xxxi, [1], 1-170, 169,170, 171-500pp. 66 engraved plates, numbered I-LXIX including the portrait frontispiece, of which 6 are double-page, all with paper guards; the joints and extremities of the boards rubbed, occasional light toning and scattered spotting to the later plates, occasional offsetting to the paper guards, the text leaves generally clean and bright.

Provenance: 1. John Duke Coleridge (1820-1894) 1st Baron Coleridge of Ottery St. Mary (1874), with his signature ‘ Coleridge Heath’s Court 1888 -.’ to the f.f.e.p. Heath’s Court, Ottery St. Mary was the Coleridge family home - John Duke was the poet’s great-nephew. He enjoyed a distinguished career as a lawyer, judge, and Liberal politician. In 1871 he was appointed Attorney General and in 1873 succeeded Sir William Bovill as Chief Justice of the Common Pleas. 2. George Somers-Clarke (1841-1926) architect and Egyptologist, with his ink signature to the f.f.e.p. ‘Somers-Clarke -1897 Architect in charge - 1897-1907’. Somers-Clarke’s practice was based at Dean’s Yard, Westminster. He held the post of Surveyor of the Fabric of Saint Paul’s Cathedral between 1897 and 1907.

Sir William Dugdale’s The History of Saint Paul’s Cathedral was first published in 1658 and again in 1716 under the editorship of Edward Maynard. The present edition, issued in parts between 1814 and 1818, was edited by Henry Ellis, Keeper of Manuscripts at the British Museum and brought the history of Saint Paul’s up-to-date. Wenceslaus Hollar’s etchings of the pre-Wren cathedral which had appeared in the two previous editions were carefully re-engraved by William Finden, Bernard Adams noting that, ‘These plates are extraordinary examples of facsimile work, the measurements being correct to within a millimetre; had he substituted Hollar’s credit for his own and engraved the dedication cartouches and original captions, and had the etchings been printed on laid paper, they would have deceived all but the expert.’ In addition for Ellis’s ‘continuation’, describing and illustrating Wren’s cathedral, Finden etched two of Wren’s drawings preserved at All Souls College, Oxford. The engraver John Coney drew and etched a plan and an exterior and interior view, as well as engravings of Nelson’s sarcophagus and Wren’s memorial. A further sixteen plates depicting the neo-classical statues, by among others Flaxman, Chantrey and Westmacott, were drawn by Henry Corbould and etched in outline by Charles Heath.