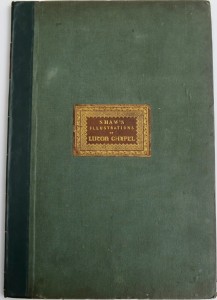 The History And Antiquities Of The Chapel At Luton Park . A Seat Of The Most Honourable The Marquess Of Bute.

A valuable record of the Late Gothic carved wooden fittings, including the pulpit, altar, choir stalls and panelling installed by Sir Robert Napier at some point in the seventeenth-century in the first chapel on the site at Luton Hoo, a large portion of it having, in all probability, been removed from one of the side chapels in the parish church at Luton. Henry Shaw’s work shows the fittings as they were subsequently installed in the estate’s new private chapel, designed and built in 1816 by Robert Smirke for the Marquess of Bute. The engraved plates after careful drawings by Shaw, are comprised of perspective views of the interior of the chapel, along with sections and details. The scholarly text was supplied by James Ingram the President of Trinity College, Oxford.

In 1843 the chapel was destroyed in a fire that also largely consumed the interior of the Adam house. The chapel was subsequently rebuilt for the Wernher family in a Russian Orthodox style.