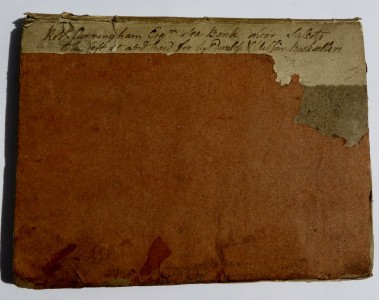 The Coal Viewer, and The Engine Maker's Practical Companion.

4to. (253 x 192 mm) Original pink paper-covered drab boards worn; 96pp., 5 folding engraved plates; age-toning to the margins, the joint of the upper board split at the head and tail but the cords holding and strong, dust marks to the fore-edges, but overall a bright, clean copy.

Provenance: Robert Reid Cunninghame of Auchenharvie (1744-1814), landowner, with his engraved armorial bookplate to the front pastedown. The paper backstrip inscribed in ink, possibly in Curr’s hand, ‘ Robt. Cunningham Esqr. Sea Bank near Salcots/to be left at and paid for by Dunlop & Wilson Booksellers’.

Born in Durham County where he likely gained his initial experience in the mining industry, John Curr (c.1756-1823) was employed from about 1778 by the Dukes of Norfolk to manage, or ‘view’, the family’s coal mining interests in and around Sheffield. It was during his time there that he made a number of innovations that were to have far-reaching consequences, not only for the coal and mineral mining industry, but also for the nascent passenger railway system: not least of these innovations were the invention of a cast-iron angled rail, and the introduction of wheeled waggons, or ‘corves’ that enabled coal to be transported easily and efficiently from the seam to the mine shaft, then, by means of a steam-powered engine, on up to the surface from where it was conveyed to the canal network for distribution. The present work describes with great clarity every aspect of the operation, including descriptions of the angled rail, the waggons and the winding engine, enhanced by five folding engraved plates showing plans, sections and details. Chapters include descriptions of the method of conveying coal under- and over-ground by the use of cast-iron rails; machinery for opening and shutting doors underground; a fire-, or steam-engine for drawing ‘corves’ of coal up to the surface. Included are detailed costings which serve to emphasise the savings to be made by the adoption of Curr’s inventions.

The present copy has a fitting association, connecting Curr’s experiments and innovations to Robert Cunninghame, a mine owner with extensive land holdings in North Ayrshire. Cunninghame would have been, at the time of the publication of Curr’s work, or shortly thereafter, seeking a swifter and more efficient method of transporting coal from his mines to the Stevenston canal which he and his business partner Patrick Warner of the Ardeer Estate had constructed in the early 1770s to avoid both the soft ground, and the tolls, on the road leading to Saltcoats [Salcots] harbour on the coast.

This copy also demonstrates one of the ways in which a publication, in this case, of interest to a mine owner like Cunninghame, might find its way into a purchaser’s hands. It seems likely that being published by the author himself, and distributed via a network of booksellers, Cunninghame may either have got to hear of the publication directly from Curr, or indirectly from an associate, or possibly, Dunlop & Wilson, the Glasgow booksellers alluded to in the inscription on the upper board and listed on the title-page as one of the booksellers from whom copies could be purchased. An unsophisticated copy in its original binding.