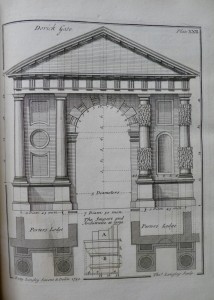 The City and Country Builder's and Workman's Treasury of Designs: Or the Art of Drawing and Working The Ornamental Parts of Architecture. Illustrated by upwards of Four-Hundred grand Designs, neatly engraved on One hundred and Eighty-six Copper Plates, for Piers, Gates, Doors, Windows, Niches ... Chimney Pieces, Pavements, Frets Gulochi’s, Pulpits, Types, Altar Pieces, Monuments, ... Stone Tables, Book-Cases, Cielings, and Iron Works. ... With an Appendix of Fourteen Plates of Trusses for Girders and Beams, different Sorts of Rafters, and a Variety of Roofs, &c. To which are prefix’d, The Five Orders of Columns, according to Andrea Palladio; whose Members are proportioned by Aliquot Parts, in a more easy manner than has yet been done. ... By B.L.

London, Printed for and Sold by S. Harding on the Pavement in St. Martin’s Lane, 1745.

4to. Handsomely bound in contemporary full gilt-ruled tree calf, sometime expertly rebacked to match, the spine divided into six compartments with raised bands, the second compartment with a red morocco and gilt label, gilt turn-ins, all edges red, marbled endpapers sometime renewed to match the original ones; 1f. (title-page, verso, introduction and a note on the plates of the appendix), 22pp. +186 engraved plates numbered I-CLXXXVI, and a further fourteen plates, not present in the first edition, numbered 1-14; very light bumping to the corners of the boards, the engraved plates bright and clean.

Provenance: Edward Lascelles (1740-1820), 1st Earl of Harewood, with his engraved bookplate to the front pastedown.