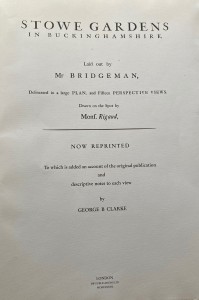 Stowe Gardens In Buckinghamshire. Laid Out By Mr Bridgeman, Delineated in a Large Plan and Fifteen Perspective Views. Drawn on the Spot by M. Rigaud, Now Reprinted To which is added an account of the original publication and descriptive notes to each view by George B Clarke

Limited edition of 450 numbered copies and 24 [sic] copies lettered A-Z, presumably omitting the letters ‘I’ and ‘O’. This copy numbered 166.

Printed on Zerkall 100% cotton 200 gsm mould made, laid paper to match the handmade paper on which the copper-plate engravings were first printed in 1739. The plates are printed by offset lithography, and plate marks superimposed to give a similar appearance to those impressed by the original copper plates. Designed and printed under the direction of Dennis Crompton of the Architectural Association Print Studio. The book is hand stitched and hand bound in quarter leather over marbled paper-covered boards by John Llewellin of Woolley, Huntingdon, Cambs., assisted by Blair Jeary.

A handsome facsimile of the now very rare set of engravings by Jacques Rigaud and Bernard Baron of the gardens at Stowe as laid out by the Royal Gardener, Charles Bridgeman for Lord Viscount Cobham between 1713 and the mid 1730s. Commenting on Rigaud’s drawings of the gardens at Stowe, from which the engravings were copied, Peter Willis, Bridgeman’s biographer,notes that, ‘Taken as a group the Views of Stowe form the most comprehensive drawings of any English landscape garden.’ 1. The name of the engraver of the accompanying plan, possibly executed at a later date than the drawings, is presently unknown. Initially issued in 1739 shortly after Bridgeman’s death by his widow Sarah, the plates were reissued in 1746 with a new title page around three years after Sarah’s death. The lively perspective views record Bridgeman’s improvements and the accompanying architectural elements supplied by John Vanbrugh and James Gibbs. As noted in Ben Weinreb’s catalogue 54, Garden Architecture And Landscape, William Kent’s work at Stowe ‘was not sufficiently advanced to appear in the views, but is hinted at in the plan.’ 2. However as George B. Clarke posits in the accompanying text to the facsimile engravings, the absence of Kent’s contributions may be the result of professional rivalry.