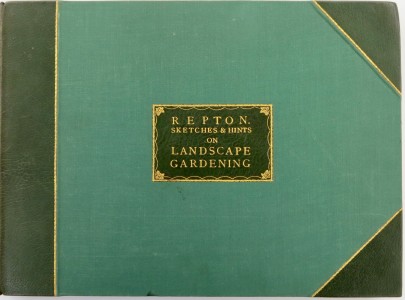 Sketches And Hints On Landscape Gardening. Collected From Designs And Observations Now In The Possession Of Different Noblemen And Gentlemen, For Whose Use They Were Originally Made. The Whole Tending To Establish Fixed Principles In The Art Of Laying Out Ground. By H. Repton Esq.

Printed By W. Bulmer And Co. Shakspeare Printing-Office, And Sold By J. And J. Boydell, Shakspeare Gallery; And By G. Nicol, Bookseller To His Majesty, Pall-Mall., [1795].

Oblong folio (268 x 370 mm). Bound in twentieth-century dark green half morocco gilt, the spine lettered and decoratively tooled in gilt, green morocco and gilt lettering piece to the centre of the upper board, marbled endpapers; xvi (including half-title, title, dedication, and a 2 pp. list of 57 Red Books), 83, [3] pp., 16 unnumbered aquatint plates (numbered in pencil in Roman numerals at the lower margin by a later hand), of which 10 are hand-coloured, 14 with overslips, of which 6 have 2 overslips each, 2 small wood-engravings at p.3, one large wood-engraved tail-piece at p. 83., the dedication leaf and pls. [II and VI] watermarked J. Whatman; booksellers typed catalogue description laid down to the front pastedown; small puncture to the outer margin of p. 55, not affecting the text, a bright, fresh copy with the aquatints carefully hand-coloured.

With an original watercolour sketch (watermarked J. Whatman), historically attributed in commerce to Repton, of the west front of Welbeck Abbey in Nottinghamshire, the seat of the dukes of Portland, with an overslip showing ‘before’ and ‘after’ proposed alterations by the author. The composition of the sketch with a few minor differences is repeated in the manuscript Red Book for Welbeck Abbey, and again in the hand-coloured aquatint with overslip [plate IV], in the present work. It is known that, at this early date in Repton’s landscaping career, and being unsure of his skills as a draughtsman, he employed the artist George Samuel to work up his preliminary sketches for the finished watercolours presented in the Red Books. The watercolour sketch with the present work, bears comparison, particularly in the treatment of the foliage, with a watercolour sketch of Lathom Park, ascribed to Repton in Weinreb Catalogue 17: item 126. - this sketch, appears as an aquatint, plate [XV] in the Sketches and Hints.

First edition of Humphry Repton’s first published book. Scarce: a print run of just 250 copies was reported by Repton in his An enquiry into the changes in taste in landscape gardening … of 1806. It was Repton's original intention to extend Sketches and Hints On Landscape Gardening ... to several volumes, but the pressures of a rapidly growing and successful practice put paid to that notion: it was eight years before his next illustrated work, Observations, was published. The carefully drawn plates of various houses in their landscape setting, with ‘before’ and ‘after’ views, facilitated by the use of overslips, were adapted from the original sketches supplied in Repton’s own manuscript Red Books given to prospective clients around the country. By going into print Repton was providing a manual of landscape gardening and a valuable record of his commissions to date. His theories were not without controversy, attracting hostile reaction, notably from the writers, Uvedale Price and Richard Payne Knight - the footnotes and an Appendix attempt to answer these criticisms - indeed what may have been a libellous two or three word reference to Knight in one of the footnotes on p. 51, in a discussion of Tatton Park, has been erased in all copies.

William Henry Bentinck (1738-1809), the third Duke of Portland was Repton’s most important and influential patron. Commencing in 1790 Repton supplied the duke and his heir with no less than three Red Books (1790, 1793, 1803), illustrating improvements to be made at Welbeck Abbey, the family’s principal seat. It is the first two of these Red Books that form a sizeable portion of the discussion and plates within the Sketches And Hints ... , with five of the sixteen aquatint plates (IV, V, VI, X, XI) devoted to the estate. The fourth plate, replicating the original sketch, and the finished watercolour in the 1790 Red Book, shows the west front of the Abbey, the overslip showing a pedimented facade to be replaced with a castellated porch and roof line, the ground approaching the building to be raised to make the original ground floor a basement floor, and the original first story the principal entrance and ground floor. The theory informing the ‘improvements’ wrought by earth-moving is discussed on pages 25 -27 and illustrated in the tenth plate. The eleventh plate, a large double-page hand-coloured aquatint plate with two overslips, shows Repton and his assistants at work at Welbeck, surveying and sketching the surrounding parkland.