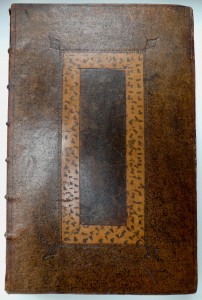 Rules And Examples Of Perspective Proper for Printers and Architects, etc. In English and Latin: Containing a most easie and expeditious Method to Delineate in Perspective All Designs relating to Architecture, After A New Manner, Wholly free from the Occult Lines: By That Great Master Thereof, Andrea Pozzo, Soc. Jes. Engraven in 105 ample folio Plates, and adorn’d with 200 Initial Letters to the Explanatory Discourses: Printed from Copper-Plates on ye best Paper By John Sturt. Done into English from the Original Printed at Rome 1693 in Lat. and Ital.. By Mr. John James of Greenwich.

London, printed by Benj. Motte. Sold by John Sturt in Golden-Lion-Court in Aldersgate-Street. 1707.

Folio. (424 x 285 mm). Contemporary Cambridge calf, the spine divided into seven compartments with raised bands, morocco and gilt-lettered label to the second compartment, the remaining compartments extensively and decoratively gilt-tooled, all edges sprinkled red; engraved frontispiece, two engraved title pages, the first in English, the second in Latin, [2]ff. etched and engraved dedication to Queen Anne, [2]ff. preface, [1]f. etched subscribers’ list, verso blank, [1]f. ‘Advice’, full-page engraved plate to the verso, 55ff. explanatory text, and 101 full-page plates by John Sturt, numbered I to C but with 2 plates numbered LIIIA and LIIIB with manuscript cancel-slips indicating an early state, (see also below), 2 etched and engraved title-page vignettes, 210 etched or engraved historiated initials also by Sturt, comprised of 103 different designs, a small number of corrections to the text on manuscript cancel-slips; a superior copy, the plate impressions strong and dark throughout and the pages crisp and clean, some wear and splitting to the hinges at the head and tail of the spine but overall a better than very good copy of this striking and uncommon work, the finest of the many editions of Pozzo's work and one of the most beautiful architectural books published.

Complete with the subscribers' list, bearing just 161 names, including those of Dean Henry Aldrich, Nicholas Hawksmoor, John Talman, John Vanbrugh, Henry Wise and Sir Christopher Wren. An approbation by Hawksmoor, Vanbrugh and Wren promotes the book as ‘a work that deserves encouragement and very proper for instruction in that art’.

Provenance: 1. Mountagu-Garrard Drake (1692-1728) of Shardeloes, with his armorial bookplate dated 1708, to the verso of the Latin text title-page. Drake was the Tory Member of Parliament for Amersham in Buckinghamshire. His son William had Shardeloes remodelled between 1758 and 1766 by the architect Stiff Leadbetter in a Palladian style. Robert Adam was subsequently commissioned to design the interiors and the portico. 2. W.A. Foster, with his neat signature in black ink below Drake’s bookplate, and again to the upper margin of the English title page, also his Beardsleyesque bookplate, to the front pastedown.

An early state of the first English and Latin edition of Volume I (all published) of Andrea Pozzo’s two-volume work Perspectiva pictorum et architectorum first published in Rome in 1693.