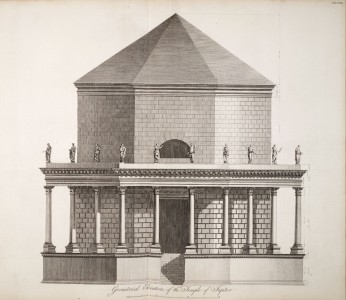 Ruins Of The Palace Of The Emperor Diocletian At Spalatro In Dalmatia.

Large folio. Bound in near-contemporary full calf, gilt- panelled, rebacked preserving the original gilt-tooled spine, gilt-stamped arms to the centre of the upper and lower boards; title leaf, dedication leaf, 4ff. list of subscribers, pp. 33 + [1], 61 finely engraved plates, some folding (printed on 54 ff.); a little light spotting to the margins of the text leaves as usual, nevertheless a pleasing copy in fresh condition with good impressions of the plates.

Sole edition. Robert Adam’s volume on the palace of Emperor Diocletian at Spalatro (now Split), had its genesis in the mid 1750s, with the architect’s desire to publish a revised and corrected edition, with fresh plates, of Antoine Desgodetz’s Edifices Antiques de Rome first published in France in 1682. At the same time, in the company of the artist and antiquary, Charles-Louis Clérisseau and Piranesi, Adam set about recording the remains of Hadrian’s villa at Tivoli and the Baths of Caracalla and Diocletian, again with the aim of going into print. None of these projects came to fruition, as by October 1756 Adam had decided to visit Spalatro to make accurate drawings of the palace complex with a view to forming the basis of a publication on the subject. Along with Clérisseau and two other draughtsmen, Adam spent five weeks there studying the ruins of the palace between July and the end of August 1757.

Returning to London, Adam left Clérisseau in Venice where the latter embarked upon the task of supervising a team of engravers in turning a proportion of the drawings into plates. this was to be fraught with problems as Clérisseau’s eye for the picturesque and the sublime tended to create discrepancies in the details displayed in the perspective views and those of the sections and as such was at odds with Adam’s intention of putting before the public an accurate record of what remained of the palace. In addition, it transpired that Clérisseau had taken every opportunity to display his drawings to visiting English cognoscenti in Venice, leaving most in no doubt that the majority of the views had been made by himself under Adam’s supervision. Consequently, Adam felt it necessary to minimize Clérisseau’s part in the venture, at one point even considering printing 'Robert Adam ‘delint' at the foot of every plate. In the event, Adam contented himself by leaving all signatures off the plates except for those of the engravers and giving Clérisseau only the briefest of mentions in the preface.

The text was no less an issue, as Adam, while feeling unequal to the task nevertheless was keen to give the appearance of it being from his own hand. Having cast around for an author Adam initially engaged his brother-in-law John Drysdale, whose indolence was such that Adam eventually turned to his cousin, William Robertson, the historian. this proved fortuitous because as Fleming notes, ‘Robertson’s collaboration is of the greatest importance, for it extended beyond the mere wording of the Preface. His lucidity, his scholarly detachment and, above all, his passion for scrupulous accuracy and constant recourse to documentation were to influence Robert profoundly.’