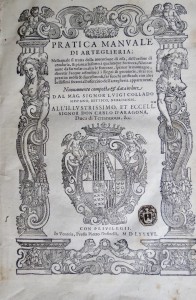 Folio (448 x 306 mm.). Contemporary limp vellum, titled in ink to the spine; title-page incorporating a large architectonic wood-cut border and the arms of the Duke of Aragon, + xpp. + 92ff., including 37 woodcut illustrations of which 8 are full-page, historiated initials, a number of wood-engraved head- and tail-pieces; the upper cover and spine worn with some losses, small worm-hole to the lower gutter, diminishing throughout the text block to the size of a pin hole; old, light localised stain, possibly old candle wax, to f.25 and verso of same, a number of ink annotations in a later Italian hand to the margins, neat, old armorial ownership stamp to the title-page, overall a bright, crisp copy.

Luys Collado was born in Spain and served Philip II as royal engineer to the king’s army in Lombardy and Piedmont. Handsomely illustrated with large woodcuts the Pratica Manuale is devoted to the manufacture, use and methods of a variety of cannons and other artillery, but also touches upon mining and the making of fireworks. Chapter CXVI (commencing on f. 82) contains a number of recipes for making recreational fireworks, including one for ‘balle di fuoco inestinguibile, potentissimo, &c. forte, che arderanno sotto acqua, & faranno altri maravigliosi effeti’, and a recipe for Greek fire.
Philip notes ‘Although the 1586 edition does not contain any plates the editions of 1592, 1606 and 1641 include three figures depicting recreative fireworks, a line rocket, a vertical and horizontal wheel, and a device (called in Spanish ‘Las Granadas’) which consists of a thick walled tube, filled with a slow burning composition, and drilled with many angled holes each of which contains what looks like a small rocket. The text of the 1586 edition [the present work] describes these items, but they are not illustrated. This book contains some of the earliest and fullest descriptions of recreative fireworks.’

Chris Philip. A Bibliography of Firework Books: C070.1; A.R. Hall’s Ballistics in the Seventeenth Century, 1952, noting that Collado’s treatise “was the first really detailed, well-illustrated technical manual on both the theory and practice of artillery.”