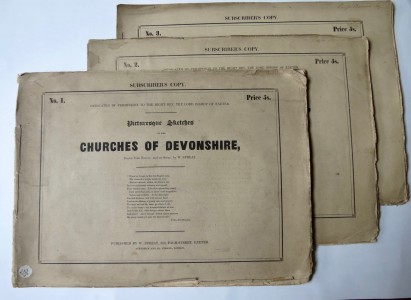 Picturesque Sketches Of The Churches Of Devonshire Drawn From Nature, And On Stone by W. Spreat.

Oblong folio (282 x 385 mm.), comprising the 18 original parts in 15 fascicles, (the final three parts in one fascicle) as issued, with a total of 74 finely lithographed views on 70 plates, with accompanying letterpress descriptions on 36 leaves, paper guards, uncut and sewn as issued in the original buff titled paper wrappers, now preserved in a custom-made black cloth solander box; plate 4 of the first part, out of series and hand-coloured, small closed and open tears to the extremities of some of the wrappers, dust marks and occasional fingerprints to some of the leaves and the wrappers, else a very good set and a remarkable survival in the original parts.

Provenance: Ralph Barnes Esq., named as one of the subscribers, with his ink signature to the upper margin of the upper cover of each of the wrappers. A Ralph Barnes Esq. is named as the Deputy Registrar of the Exeter Diocese at the time of the publication of the present work, and it seems likely that it is a publication that he would have subscribed to, particularly given the dedication of the work to the Lord Bishop of Exeter.

A valuable record of the exterior of a comprehensive selection of Devon’s medieval churches prior to in many cases, later nineteenth-century alterations and remodelings.