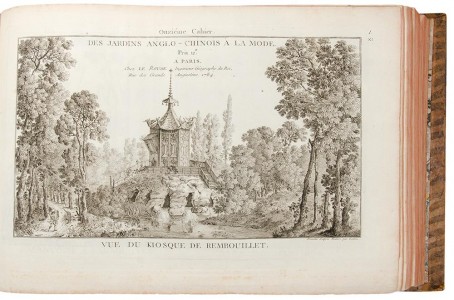 Provenance: Archibald Philip Primrose, 5th Earl of Rosebery, (1847-1929), historian and politician, Prime Minister from 1894-95, with his engraved armorial bookplate to the front pastedown.

A very rare complete set of Le Rouge's monumental work on garden design and decoration: "the most important engraved work concerning the history of European gardens during the 18th century" (Bernard Korzus): from the library of the Earls of Rosebery.

Art historian Bernard Korzus writes: "the most voluminous and most important engraved work concerning the history of European gardens during the 18th century. As a whole this publication contains the most complete collection of views of gardens of Anglo-Chinese or any other mode. These images document the history of gardening over an exceptionally long period, from the projects of George Loudon at the start of the 18th century for the alterations to Wanstead, to the gardens of Monceau and Ermenonville. The plates also contain a quantity (in part the work of Le Rouge alone) of generic general plans, details of parterres, stands of trees, mazes with views of pavilions, temples, kiosks, and other ornaments in classical, neo-gothic or chinese style. Also included are numerous representations of bridges, menageries, aviaries, theatres and amphitheatres, grottoes, 'hermitages', cascades, fountains, garden sculpture and other things of that type. Not only are we offered a large overview of the most important gardens, but also many of the second rank gardens of England, France and Germany" (approximate translation, from Bernard Korzus's essay "Georges Louis Le Rouge Un cartographie franco-allemand du XVIIIe siecle" in V. Royet. Le Rouge, Les Jardins anglo-chinois [Paris: 2004], p.50).

Georges-Louis Le Rouge (1707-1790) was a cartographer, engraver and architect. He was born in Hanover, the son of the French architect Louis Rémy de la Fosse. From 1736 he lived in Paris, where he obtained a position as military and civil engineer of King Louis XV and Louis XVI. Le Rouge began to publish 'Jardins Anglo-Chinois' in 1775 and continued the project over a period of fourteen years. Included are plans, views and details, often adapted from earlier printed sources, and occasionally from original drawings, of Stowe, Kew, Blair Atholl, Buckingham, Richmond, Chiswick, Esher, Claremont, Windsor, and Wilton, Roissy, Saint-James at Neuilly, Marly, the Trianon, Desert de Retz, numerous other locations in and around Paris, Schwetzingen, Wurzburg, Steinfurt and Orianenbaum. Of the greatest historical importance are the detailed plans of a number of gardens that have either disappeared completely or been altered to a point where the original intentions of the garden designer are no longer evident (such as the garden at Raincy which now only exists on paper). The theoretical works and garden design manuals on which Le Rouge also drew include works by Thomas Collins Overton, William Wrighte and of course William Chambers.

On a more exotic note, and typifying the vogue for chinoiserie, the ninety-nine plates of the gardens and palaces of the Qianlong Emperor of China (in cahiers 14 to 17) are particularly valuable, and evidently much more carefully executed than the versions published by Chambers. All of the plates were engraved after Chinese woodblock illustrations or paintings. Prominently featured is the Yuan-ming-yuan Imperial garden in the north of Peking. In 1744 the Emperor had commissioned an album of 40 scenes that was painted by Shen Yuan and Tang Dai. Woodblock versions of the album were printed in the Yu zhi Yuan ming yuan shi, an illustrated book of poems by Qianlong that was published in a palace edition in 1745. A short note by Le Rouge explains that the illustrations were copied for Baron Carl Frederic Scheffer [who was the Swedish ambassador in France] and given to the Marquis de Biencourt. Curiously enough, the original album was taken by French troops at the sacking of the Yuan-ming-yuan in 1860 and is now in the Bibliotheque Nationale in Paris. The other Chinese scenes show Imperial travel stations, temples, and gardens that were also copied from Chinese woodblock illustrations.

According to the auction records, the only complete copy of this work to appear at auction was sold in London in 1982. The census of institutional copies, complete and incomplete, in the United States and Europe included in Veronique Royet's masterly work on Les Jardins Anglo-Chinois notes 25 known copies. Of these, only nine are complete copies.