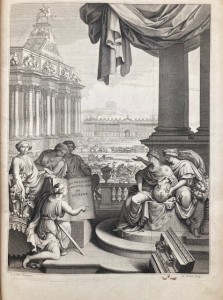 Folio (420 x 290 mm.) An attractive large-margined copy bound in contemporary full panelled calf, expertly rebacked period style by Bernard Middleton with his dated pencil signature (’April ‘04’) to the lower margin of the rear endpaper, the spine divided into seven compartments with raised bands, the second with a morocco and gilt lettering piece, the remainder decorated with gilt floral centre-tools and gilt foliate spandrels, all edges speckled red; pp.[xx], 325 (i.e. 329, numbers 234-237 repeated), ([17], index and colophon), pagination includes the engraved allegorical frontispiece engraved by G[érard]. Scotin after a design by Sebastien le Clerc, in which four muses are seen presenting a copy of Perrault’s edition of Vitruvius to a personification of France, the right hand of one of the muses resting on a capital on which the acanthus details of the Corinthian order are encircled by the French fleur-de-lys and what appear to be ostrich feathers, in the background Perrault’s Paris Observatory, in the middle ground, the east facade of the Louvre which Perrault is credited with designing, and in the foreground, the Arc de Triomphe du Thrône, temporarily erected by Perrault in the Faubourg St. Antoine in 1670, a further 65 engraved and etched plates within the text numbered I-LXV, numerous woodcut figures, engraved head- and tail-pieces; the lower edges of the binding rubbed, very lightly browned throughout as often, old faint water stain to the upper margin of the first few leaves not affecting the text, professional restoration of shallow open tears to the lower margin of eight of the leaves at the rear of the volume, not affecting the text of the index.

Provenance: John Perceval (1683-1748), 1st Earl of Egmont (1733), known as Sir John Perceval Baronet (of Burton in the County of Cork in Ireland) between 1691 and 1715, with his engraved armorial bookplate (surname spelt ‘Percivale’) dated 1702 to the front pastedown and the verso of the title page. Perceval was an MP, member of the Irish Privy Council and a Fellow of the Royal Society.

Adjacent to Plate XXI (p.91) which illustrates the proportions of the volute of the Ionic capital are detailed instructions in English, in ink in a neat open, early eighteenth century hand on drawing the volute correctly in relation to the rest of the capital. Later (C19th?) neat pencil annotations to the outer margin of p.309 relating to the deployment of the Roman ballista.

Rare. First appearance of Claude Perrault’s edition of Vitruvius. This edition and, perhaps to a greater degree, the second of 1684, were to have a profound influence on the course of French classical architecture during the last decades of the seventeenth century and throughout the greater part of the eighteenth century. The importance of Perrault’s translation, the most accurate to this date, and the controversial nature of much of his commentary was recognised immediately to the degree that, in the two years following publication and beyond, the Académie Royale d’Architecture devoted forty meetings to the study and discussion of the book’s contents.