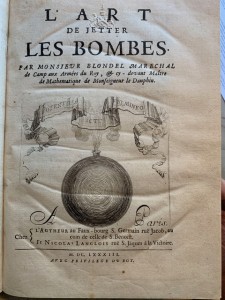 4to. (251 x 175 mm). Eighteenth century polished tree calf, the flat spine attractively tooled in gilt, red morocco and gilt lettering piece, all edges yellow; additional engraved title, large engraved vignette to the title, engraved head- and tailpieces, one engraved plate and many woodcut and engraved illustrations within the text (one plate tipped-in at p.112, pp.[8], 445, [19 (including errata leaf at end)]; a fine copy.

Provenance: The Library of the Earls of Macclesfield with its small embossed stamp to the head of the title-page, the additional engraved title-page and the first page of the dedication, the South Library engraved bookplate to the recto of the f.f.e.p., the front pastedown bears the engraved armorial bookplate of the Hon. Lieutenant-General George Lane Parker (1724-1791) the younger son of the 2nd Earl of Macclesfield and the only one of the family to have a military career.

First edition. During his infantry service, Blondel had been amazed at the crude methods of the French bombardiers. After having scrutinized all the publications on the subject including those of Galileo and Torricelli, Blondel developed a series of practical rules on the firing of mortars, explained in the present work. These rules were based on three solutions proposed by Buot, Roemer, and La Hire. Blondel used the three solutions for establishing the practical rules which he formulated in his L'Art de Jetter Les Bombes, the printing of which was delayed until 1683 by order of Louis XIV, who hardly cared to have the enemy profit by it. D.S.B., II, p. 202.

Blondel (1618-86), a military engineer and architect, wrote the standard French work on architecture (1675-83) which remained the definitive reference work for French architects for more than a century.