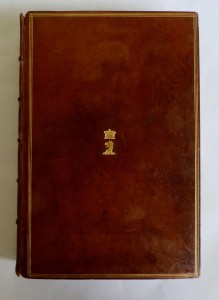 Provenance: 1. John Bligh, 4th Earl of Darnley (1767-1831), with his crest gilt-stamped to the centre of the boards. Educated at Christ Church, Oxford (matric. November 1784), Bligh was a noted amateur cricketer for Kent. His descendant Ivo Bligh (1859-1927), the eighth earl, also a cricketer, captained the English team in one of the early Ashes tests. 2. Michael Jaffé, (1923-1997), art historian and authority on Rubens and Van Dyck, with his bookplate to the front pastedown.

First edition in this form and with the English translation. John Bligh as the ‘Right Hon. Earl of Darnley’ appears in the subscribers’ list.

A handsome copy of the Elementa. Planned by Aldrich as a Vitruvian treatise in two parts, the first part is devoted to civil architecture, the second to military architecture. A partial edition of ‘only ten copies’ comprising forty pages of text and twelve illustrative engraved plates with the title Elementorum Architecturæ was printed at the university press for friends of Aldrich sometime around 1708. One of the recipients was Aldrich’s friend and collegue, Dr George Clarke who, following the former’s death in 1710 appears to have acquired the complete manuscript of the treatise and the accompanying drawings, these he subsequently bequeathed to Worcester College. The present work, the first complete edition, published a century after Aldrich’s appointment as Dean of Christ Church, comprises an introduction by Aldrich’s nephew, George Oakley Aldrich and an English translation by Philip Smyth of New College. Harris and Savage note that, ‘Although the Elements had no significance as an architectural book, it can nevertheless make a valuable contribution to our slim knowledge of Aldrich’s interests in this field. Principally it helps to explain his rejection of the ascending baroque and preference for a classical Palladian style, which he so remarkably demonstrated at Peckwater Quadrangle (1706-14).’