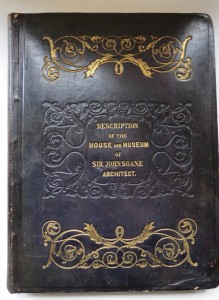 Description Of The House And Museum On The North Side Of Lincoln’s Inn Fields, The Residence Of Sir John Soane. bound with Description De La Maison Et Du Musée ... Du Chevalier Soane.

[London], Printed by Levey, Robson, And Franklyn, St. Martin’s Lane. Not Published. [1836] dated thus at foot of the spine.

Large 4to. (372 284 mm) ‘Bound by J. Smith 49 Longacre’, London, in contemporary full dark purple calf, lightly rubbed and time-darkened, decorated in gilt- and blind stamp, the extremities rubbed, the lower corner of the rear board expertly re-cornered, gilt turn-ins, a.e.g.; 1f. blank, xiv, 109, [1] pp., mezzotint portrait frontispiece of Soane, and 38 outline engraved, etched, lithographed or zincographed plates (numbered I-XXXVIII), 11 etched or woodcut vignettes, head- and tail-pieces; xiv, 103, [1] pp., [1]f., blank; occasional light offsetting, old water stain to the lower corner of the rear pastedown and the final pages, with small loss to the lower corner of the rear endpaper, short, shallow diagonal crease to the tip of the lower corner of the leaves.
An extensively illustrated description of Sir John Soane’s house and its vast collection of antiquities, paintings, and sculpture The text is an expanded version of that which had first appeared in John Britton’s The union of architecture, sculpture, and painting, published in 1827, and two earlier editions of the Description published respectively in 1830 and 1835. The ‘Graphic Illustrations and Incidental Details’ are by Barbara Hofland.

Large paper copy. Privately printed for presentation only. The English language edition limited to one hundred and fifty copies, the French language edition limited to one hundred copies. The English title-page inscribed in ink ‘To Sir John Conroy K.C.H./ &c. &c. &c./ From the Author with sentiments of respect.’ and signed in ink in the lower margin, ‘John Soane’. A similar ink signature at the foot of the French title-page.

Sir John Conroy Bt. (1786-1854), was born to Irish parents in Wales. Driven by an overarching ambition, Conroy rose through the ranks of the military before being appointed Equerry to Prince Edward, Duke of Kent and Strathearn, the fourth son of George III. Following the duke’s death in 1820, Conroy became Comptroller of the Household of his widow, the Duchess of Kent, bringing him into the orbit of her daughter, the infant Princess Victoria. For the next seventeen years, he was to have an extraordinary influence on the upbringing of the future queen. Together the Duchess and Conroy instituted what became known as the ‘Kensington System’, a system of control designed to ensure that Victoria was isolated from any influence other than their own, the ultimate aim being to limit her power upon accession to the throne while increasing that of Conroy’s. Consequently, Victoria came to hate Conroy, referring to him as ‘that monster and devil incarnate’. On ascending to the throne in June 1837, Victoria immediately dismissed him, effectively banishing him from Court. Subsequently, Conroy was pensioned off, given a baronetcy and persuaded by the Duke of Wellington to go abroad for a while. On his return, Conroy retired to the family estate near Reading where he died with large debts in 1854.