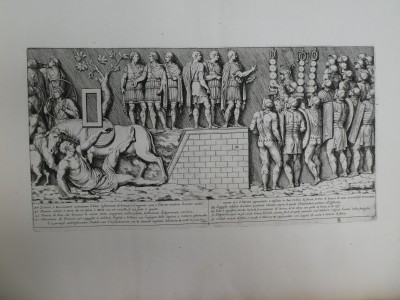 Since their completion in 113 AD and 193 AD respectively the triumphal columns of Trajan and Marcus Aurelius have been the among the most visible of Rome’s classical monuments. The helical sculptured frieze of Trajan’s Column depicts scenes from the wars fought by the emperor against the Dacians (101-102 and 105-106 AD), and that of the Antonine Column, the Danubian or Marcomannic wars (166-180 AD) waged by Marcus Aurelius.

Sir Andrew Fountaine was the eldest son of Andrew Fountaine of Narford, Norfolk. Following schooling at Eton, in 1693 Fountaine went up to Christ Church Oxford, then under the convivial and enlightened deanship of Henry Aldrich, from where he graduated in 1697. A gifted scholar, Fountaine was selected by Aldrich to make the Latin oration to welcome William III on his entry into Oxford in 1698 for which he was knighted the following year. In 1699 he accompanied Lord Macclesfield to Hanover to deliver the Act of Succession, a role which introduced him into European courtly circles. In 1707 he was appointed Gentleman Usher of the Black Rod for Ireland and accompanied Thomas Herbert, 8th Earl of Pembroke to open the Irish Parliament where he met and became friends with Jonathan Swift. Fountaine travelled widely in Europe, visiting Rome on two occasions in 1702 and 1715/16, along the way he accumulated a vast collection of medals, coins, drawings, antique sculptures, maiolica, books, and prints, as well as advising other members of the English aristocracy on similar acquisitions. Fountaine’s enthusiasm and purchasing power were such that Lord Burlington was moved to write to him from Turin in 1719 and complain that ‘ cosucci [bagatelles] are so scarce since you drained Italy.’ John Ingamells notes that Fountaine’s collection of coins was dispersed at some point in the 1720s and entered the collections of the 2nd Duke of Devonshire and the 6th Earl of Pembroke.