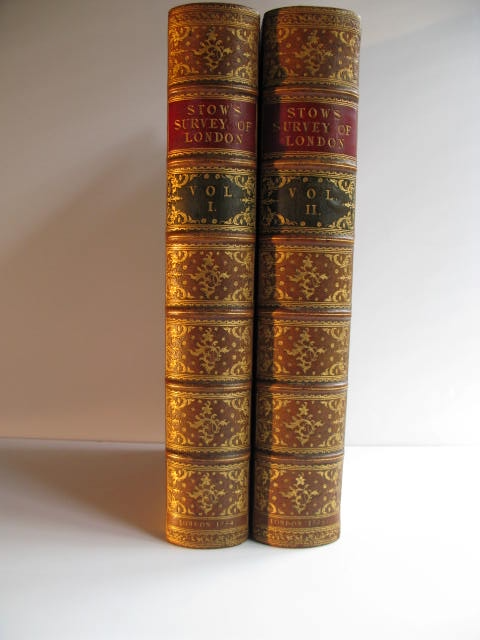 A Survey Of The Cities Of London And Westminster, And The Borough Of Southwark ... Written First In The Year 1698 (vol 2. title corrects ‘1598’). ... Very Much Enlarged In The Year 1720 by John Strype ... Brought Down To The Present Time By Careful Hands. Illustrated With Exact Maps of the City and Suburbs, and all of the Wards; and, likewise of the Out-Parishes of London and Westminster, and the Country Ten Miles round London: together with many fair Draughts of the most eminent Buildings. The Life of the Author written by Mr. Strype is prefixed .. Together with a Perambulation, or Circuit-Walk, Four or Five Miles round about London, to the Parish Churches: describing the Monuments of the Dead there interred: with other Antiquities observable in those Places; and a large Index of the Whole Work. The Sixth Edition.

This, the sixth edition is noted for the inclusion for the first time of the nine double-page engraved plates depicting the then recently built London Squares: Devonshire Square, Charterhouse Square, Southhampton or Bedford Square, St. James Square, Leicester Square, Sohoe (Soho) Square, Hanover Square, Golden Square and Grosvenor Square. More often than not these very attractive engraved plates have been removed. In addition to the engraved plates of the ‘Squares’, the volumes contain a wealth of textual and illustrated material, comprising ward and parish maps, views of the principal public buildings, churches, and hospitals within the City’s boundaries and those of the rapidly expanding areas to the west.

Provenance: Boies Penrose II (1902-1976), travel historian and book collector, with his engraved armorial bookplate to the front pastedowns. Penrose was the son of Dr. Charles Bingham and Katherine Drexel Penrose and was named for his uncle, Senator Bois Penrose (1860-1921). Being of private means Penrose was able to devote himself to scholarly pursuits, dividing his time between his estate in Devon, Pennsylvania and his house in Somerset, England.

Bois Penrose II lived at Nettlecombe Court in West Somerset. A Grade I listed Elizabethan house incorporating an earlier medieval hall, it is featured in two of H. Avary Tipping’s volumes: English Homes: Early Renaissance. (1912) and English Homes. Period III. Vol II. Late Tudor and Early Stuart (1927). It had been the home of the Trevelyan family for centuries until the death of Joan Trevelyan in the early twentieth-century. After this, the house was either purchased or leased by Penrose. The estate was sold in the late 1950s, becoming a girls’ boarding school. It is now the Leonard Wills Field Centre, and is administered by the Field Studies Council, an educational charitable trust.