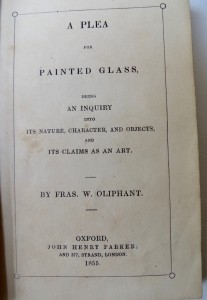 A Plea For Painted Glass, Being An Inquiry Into Its Nature, Character, And Objects, And Its Claims As An Art.

Provenance: Raymond and Pamela Lister with their wood-engraved book-label to the front pastedown.

First edition. Francis Oliphant (1818-1859), the son of a Gateshead glass cutter, was instrumental in reviving the art of glass painting and attempting to elevate its status. He worked closely with Pugin on the windows for the new Houses of Parliament, designed and made the windows in the ante-chapel of King’s College, Cambridge and several in Ely Cathedral. The present work was published in the same year that he set up his own studio.