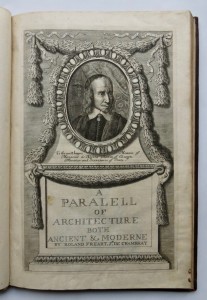 A Parallel Of The Antient Architecture With the Modern, In a Collection of Ten Principal Authors who have written upon the Five Orders, Viz. Palladio and Scamozzi, Serlio and Vignola, D. Barbaro and Cataneo, L.B. Alberti and Viola, Bullant and De Lorme, Compared with one another. ... With Leon Baptista Alberti’s Treatise of Statues. By John Evelyn Esq.

London, Printed by Tho. Rycroft, for John Place and are to be sold at his Shop at Furnival-Inn Gate in Holborn, 1664.

Provenance: ‘From Burwell Park Library May 19 - 1885’ inscribed in pencil to the recto of the front free endpaper. The house at Burwell Park Lincolnshire was built in 1760 for Matthew Lister. It was demolished in 1958.

First English edition, accurately translated by John Evelyn from the original French edition of 1650. With a printed dedication to Charles II, and Sir John Denham, Surveyor of the King’s Works. Evelyn had purchased a copy of the French edition shortly after publication and commenced translating it a few years later. The possibility of publishing an English edition was given impetus when the architect Hugh May, acquired accurate Continental copies of the original plates and wood-blocks. The BAL Early Printed Books catalogue notes that publication of the English edition of the Parallel ‘can be seen as part of Evelyn’s general concern for the encouragement of the arts in England:’.

Intended for an intellectual market, rather than the building profession, Fréart’s aim in the Parallel had been to demonstrate the superiority of the forms and proportions of the buildings of the ancients over those of the moderns. However, as a result of the clarity of the finely engraved plates, further editions did attract builders and artisans.