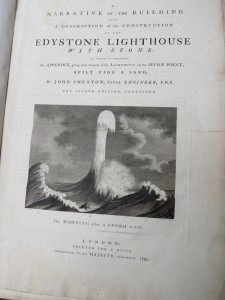 A Narrative Of The Building And A Description Of The Construction Of The Edystone Lighthouse With Stone: To Which Is Subjoined, An Appendix giving some Account of the Lighthouse on the Spurn Point Built Upon A Sand. The Second Edition, Corrected.

Provenance: John and Sylvia Reid, architects and furniture designers. Designed, among other pieces, the hugely successful ‘C’ and ‘S’ ranges of furniture for the Stag Cabinet Company.

Second edition. A thorough and handsomely illustrated account by the civil and mechanical engineer, John Smeaton (1724-1792), of the construction of his lighthouse, the third to be built on the treacherous Eddystone Rocks lying nine miles south of Rame Head in Cornwall. The volume commences with a history of the two previous lighthouses, those built by Henry Winstanley and John Rudyerd, respectively. Winstanley’s lighthouse, a wooden structure was started in 1696, survived its first winter in need of repair and was subsequently remodelled, but was destroyed in the Great Storm of 27th November 1703. John Rudyerd’s replacement, completed in 1709, was somewhat more substantial, having a brick and concrete core, clad with wood, this survived until 1755 when it was destroyed by fire.

Smeaton’s design and methods of construction for his lighthouse were innovative, its profile being modelled on that of the trunk of an oak tree, stability provided by a flared base, the dovetailing of the pre-cut blocks of granite, the use of marble dowels and a hydraulic cement which continued ‘curing’ even when underwater. The light was first lit on 16th October 1759. It served the maritime community for over one hundred years, before being replaced by the Douglass lighthouse in 1877. The stub of Smeaton’s lighthouse remains on the reef, adjacent to its replacement, the greater part of it being rebuilt on Plymouth Hoe.

In an appendix Smeaton gives an account of the design and construction of a pair of lighthouses at Spurn Point on the Humber estuary.