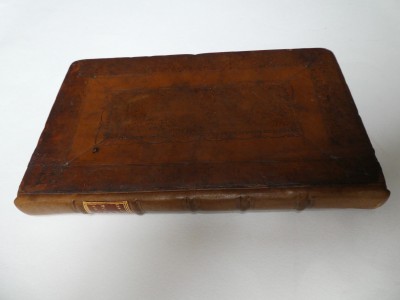 A General Treatise Of Artillery: Or, Great Ordnance Writ in Italian by Tomaso Moretii of Brescia. Ingenier first to the Emperour, and now to the most Serene Republick of Venice. Translated into English with Notes thereupon, and some Additions out of French for Sea-Gunners ... . With an Appendix of Artificial Fire-works for War and for Delight; by Sir Abraham Dager Kt. Ingenier. Illustrated with divers Cuts.

Small 8vo. (180 x 110 mm.), Contemporary, full panelled calf, attractively blind-tooled, sometime professionally rebacked in a lighter calf with raised bands, blind rules, and a gilt-lettered morocco label, the corners slightly worn, engraved armorial bookplates to the endpapers; 6, 1-124, [4]pp., lacking 2ff. prelimins (A2 and A3), often missing from the second edition, also lacking 2ff. of advertisements at the end of the volume (see below), woodcut frontispiece, 1 folding table + 8 additional plates on geometry not called for in the collation, of which 2 are folding; small light stain to a couple of the margins, 1 fold of the folding table split but neatly repaired, 1 plate slightly trimmed at the fore-edge, not affecting the image, the binding firm.

Second English edition, enlarged. Tomaso Moretti’s Trattato dell’Artigliera was first published in Venice in 1665, and the first English edition in 1673. This, the second edition, is augmented by an appendix of military and recreational fireworks (2 of the plates illustrate recreational fireworks) and a 'Definition of Geometry’. The present copy collates as the Macclesfield copies, except that the ‘Definition’ is bound at the rear of the volume rather than in the prelims - see Sotheby’s Library of the Earls of Macclesfield, Part 10, Lot numbers 3672-3674, where 2 of the copies lacked the dedication, and all 3 copies lacked the advertisement leaves.

Provenance: 1. Wm. Granville Eliot Esq., with his early nineteenth century engraved bookplate to the front pastedown. In all probability Lt. Colonel William Granville Eliot Esq. (1779-1855), of Valebrooke Lodge, Sussex. Eliot had a notable military career, fighting at the Battle of Talavera(1809), the Battle of Fort Lillo (1809) and the Battle of Bergen-op-Zoom (1814). He was the author of A Treatise on the Defence of Portugal, first published in 1810, with second and third editions issued the following year. In addition, Eliot revised later issues of The Pocket Gunner and The Bombardier. 2. Mark Dineley, with his nineteenth-century engraved bookplate to the recto of the f.f.e.p.