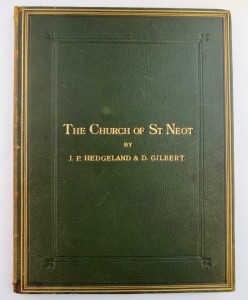 Provenance: In all likelihood, given the presence in the volume of the letters described below, this copy belonged to the co-author of the present work, the Cornish engineer, author and politician, Davies Gilbert (1767-1839).

First edition. Large paper copy. A beautifully illustrated record of the largely medieval stained glass windows in the fifteenth-century church of St. Neot, spectacularly situated on the edge of Bodmin Moor. Between 1825 and 1830 John Hedgeland undertook the restoration and renewal of the windows. He was assisted in his work by the London glass painter, James Nixon and the glazier B. Baillie, the costs being borne by the former vicar and patron of the church, the Rev. Richard Gerveys Grylls to whom the present work is dedicated (see below). According to Peter Beacham writing in the recently revised edition of Pevsner’s Cornwall, the ‘glory of the church is its stained glass, a remarkable survival of a complete pre-Reformation glazing scheme, at its best comparable in quality to Fairford, Gloucestershire.’ He notes that ‘fourteen of the seventeen windows contain medieval glass, mostly dating from 1480 to 1530 but perhaps incorporating some components from a mid-C15 scheme (in the original E window) suspended when the church was enlarged in stages from 1480 onwards,’ .

With two very interesting letters from Hedgeland to Davies Gilbert at the rear of the volume, concerning the publication of the present work and the proposed wording of its dedication to the Reverend Richard Gerveys Grylls; another letter presumed to be to Davies Gilbert from Richard Taunton, concerning another allied work, and its rarity, The Life of St. Neot, 1809, by John Whitaker (d. 1838). Taunton was Whitaker’s son-in-law.

I beg to acknowledge the receipt of your letter of the 5th inst, with my best thanks for the very kind manner in which you have promised your valuable contribution to my proposed publication of St. Neots windows.

I feel particularly indebted by your permission to insert your name as contributor of the interesting information which you are collecting, and shall use every exertion in my power to render the drawings and etchings of the windows deserving the assistance which you are so kindly preparing to give it.

I expect, before your return to town, to get five or six of the etchings finished, and, with your permission, will then take the opportunity of submitting them to your attention.

I have the honor to be, sir, very respectfully, your much obliged and very humble servant, J. Hedgeland.

I was apprehensive, by your not having received any more than the first two proof sheets when you wrote to me on the 23rd inst. that there must have been some mistake with the printers about it, and I am glad to find by your letter of yesterday that the others have since been forwarded to you.

I have received a letter from Mr Grylls in answer to one wherein I had asked his permission to inscribe the etchings to him. He has very kindly given me this permission and desires me to submit the inscription to you and to suggest whether it may be applied to the whole book and not to the etchings only. The following inscription is that which I had proposed.

“To the Revd Richard Gerveys Grylls, in commemoration of the taste, zeal, and liberality displayed by him in the restoration of the ancient windows of St Neots church, and as a testimony of personal gratitude and respect, the following representations of the windows are inscribed by his obliged and faithful servant, JPH.”

Supposing the inscription to be placed at the commencement of the book it may require the substitution of the words “this volume” for “the following representations, etc.” or indeed any alteration which you may be pleased to make in it.

I forwarded Mr Thomas Grylls’s M.S and proof sheets to him on Thursday last.

The apprehension of a return of rheumatic fever has kept me during this severe weather almost a prisoner in my house, and prevented me from making the necessary enquiries at the printing office.

The history of St Neot by my father-in-law was not quite finished when he died. The proof as printed in 1809 by Mr Gilbert, then of Crown Court, Fleet Street, but now living with his son the editor of the Cornwall Gazette in Truro. The publisher was John Joseph Stockdale, then of no. 41 Pall Mall, but now of the Opera Colonnade. Mr. Gilbert’s copy, as printer, was burned at the same time that he had so great a loss by fire in Salisbury Square, Fleet Street.

There is a copy here in the Cornwall Library, but which can only be lent to subscribers. I wish I had a copy which I could lend to you. If I can borrow a copy anywhere how can it be sent and returned?